Just wanted to give a big lovin’ shout out to Pear Deck’s student paced mode! I’m finding it a super efficient pre/post/mid classroom function! Last week for the first time I made what was normally a book section review a Pear Deck assignment. I had a link to the pages the kids needed to peruse for the section review available, as well as the student paced link in the calendar page. 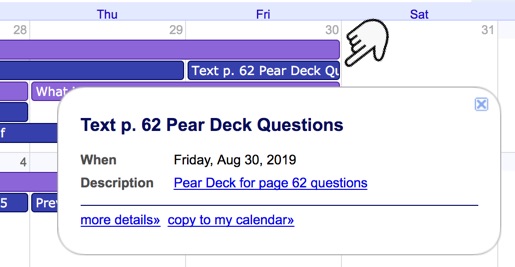 They were able to get to the assignment with everything they needed in the class’s calendar. One of my students was sick during that entire week, but did the assignment at home. When I had my 8th grade class working on it during class time, I switched modes to projector for displaying, but promptly switched back to student paced each time so they could advance through slides and work at their own pace. As the kids worked out these questions using their books, and notes as a guide, they worked together as I facilitated discussions among their table groups & friends carrying around my computer and constantly glancing at the dashboard to see what kids were doing in real-time. I occasionally displayed what they were working on, and we had much richer discussions about each question than we ever got when I just had them work these out individually on paper.

p625
Many more of them did the questions correctly on this tough assignment and learned at a deeper level than any previous class! After the class, I reset the Deck back to student paced mode to allow for follow-up work any student might need to complete.
Eventually, when I close these decks I always send takeaways.
What a wonderful tool!

On the following week, Thurs. Sep. 12th my 6th grade Physical Science classes were writing conclusions to our first lab of the year.

Since about a third of them were finishing their conclusions and turning in their lab papers, I needed a “cross-over” activity that would get the early finishers a head start into our next activity, so I set them lose on the next Pear Deck. They had just received their new computers the day before from our district’s “1-to-Web” computer lease program, so they were hot to use their new computers on something fun and educational. Their next task was to find the calendar page 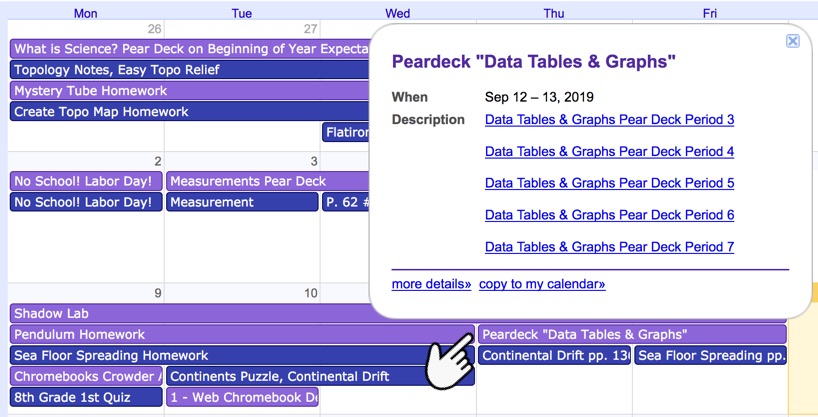 and click on the student paced link for the Data Tables and Graphs Deck that our classes would work through on the following day. They sharpened their teeth on this assignment individually as I helped the other slower paced writers with their conclusions. Then, Friday I had them all click on the student paced link in the calendar to get into the Pear Deck – instead of going through the usual joinpd.com join page so they would become more familiar with the calendar links. My hope is that they become more adept at checking out what we do in class when they are absent, and generally prepare more for class by checking occasionally on these Decks. Once they got into the Deck I switched to projector mode. At one point, I had made a slide that required students to view a data table, and make a graph of that data table on the following draw slide. 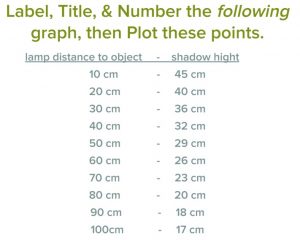 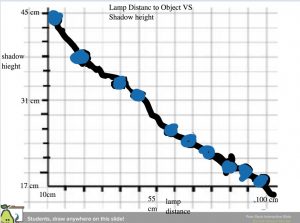 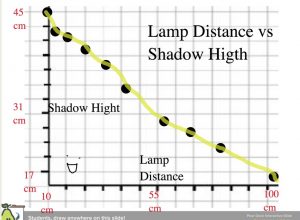 So, knowing that they would appreciate the ability to switch between the data table slide and the graphing slide, I switched modes in mid stride back to Student Paced. They happily worked out the graphs for a while, and as soon as a few of them had their graphs mostly done, I changed mode back to projection and displayed some of the best ones to inspire everyone. We discussed a few of them pointing out things to work on and what looked good and why. Then, I switched it back again to projection. When, class was over I switched it back to student paced for every class. This practice was good for me because now I’m much more confident and efficient with getting students moving through the material at their own pace while keeping everyone engaged in the class! Thanks again Pear Deck!