September 2nd Sent a new tutorial video I made
on how to use Google Slides to make interactive with Pear Deck.
These are made with Camtasia & Snagit Software by Techsmith

Shortly after this on September 3rd sent out the UPGRADE CODE for Pear Deck Premium! A super valuable piece to getting teachers the full power of Pear Deck!

September 3-6
Helped Jessie Hill and Will Fulton with use of Pear Deck’s full functionality. Gave Will a set of French Pear Decks that I got from another French teacher who uses Pear Deck. Talked with Jessie for a few days about how to use the Pear Deck dashboard. She attempted it on Sep. 5th, but didn’t go through the teacher portal correctly, so it didn’t work on Sep. 5th. But, we debriefed on Sep. 6th she’s now ready with how to go through the process.

September 14th
Made blog post about Switching Between Student Paced vs. Projector modes in Pear Deck

October 20th
I often use Flipgrid as a video response method to formative assessment assignments for 6th graders who love the interactive nature of filming themselves formulating a response. This year, I created a Flipgrid for our students to make three promises they’ll try to keep for this year. I also entered the grid in Flipgrid‘s “Disco Library” where they keep a stored data base of educator’s templates that can be shared with other educators who might want to use pre-made grids. Flip Grid’s Disco Library for October


Today, I decided to test out Pear Deck’s new Immersive Reader function. First, I joined an open Deck as a student for the test. Found the ON button in settings, and went back to the open student slide, and the Immersive Reader icon was on the bottom right of the page. I was a little shocked that it would work on a Deck that I had already made, rather than being required to create a whole new one with the new functionality! Clicked on the icon which brought me the Immersive Reader dialogue page, chose a color I like in the background of the page, changed font sizes, changed between male and female voice, and speed. And found the speed setting to be a little fast.
If the student really needs text read to them, then the voice speed probably needs to be all the way left on the turtle, or one click above it. I found that you can adjust the speed during the translation,, which is going to be useful for several kids at some point. The translator is awesome! I tried translating a slide to German, and it changed everything to German and read it back in German! Works like a charm! The back button at the top is really nice. I was able to cruise efficiently back and forth between a draw slide and the immersive reader page. The slides I tried were all dense with scientific language, like “theropod, sauropod, trilobite” and the pronunciations were dead-on! There were no glitches. Everything worked seamlessly on my Mac running Chrome.
This new tool is going to be a godsend for teachers who have second language students, or low ability readers. I can see so many places where this one feature will be the selling point for new Pear Deck users!
Thanks for bringing it everyone involved in the integration of Immersive Reader!

Continued use of SMART SLATE throughout the 19/20 school year.

September 4th
I am teaching 8th grade Earth Science again, after being away from it last year. Created the first “leveled” based upon the Math Department’s recommended testing approach practice test and added to the calendar so that my 8th grade Earth Science class could access and practice the material before they are tested:
Link to Earth Science Test 1.
Page 1 answers
Page 2 answers
Page 3 answers
This has become a yearly practice with the goal of instilling in my students the importance and inherent payoff of diligent study practices. And I do find that my students respond overwhelmingly with positive results, and feedback from parents that they learned how to study in my class!

August-September Start of Year
This year I decided to use Pear Deck for many of our Introduction to Classroom Norming – such as safety protocols and general classroom expectations. Many of our systems we use in Science at LMS can be reinforced with formative assessments like Pear Deck. Here are some examples of what we did with 8th grade Earth Science: 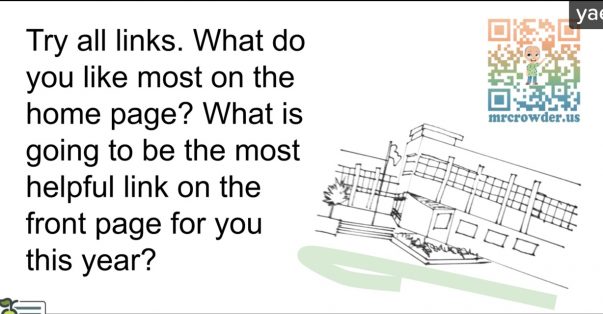 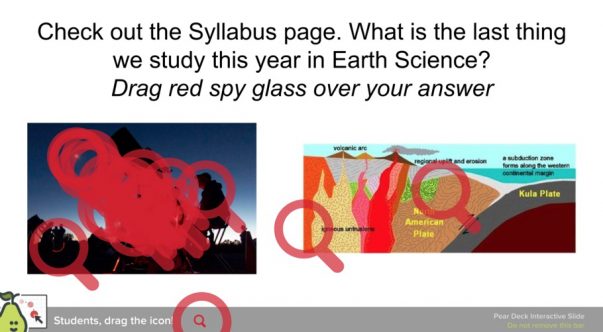 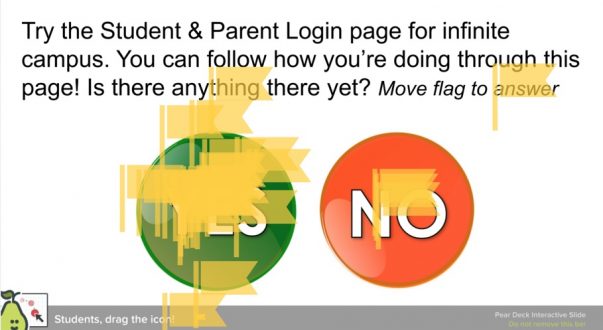 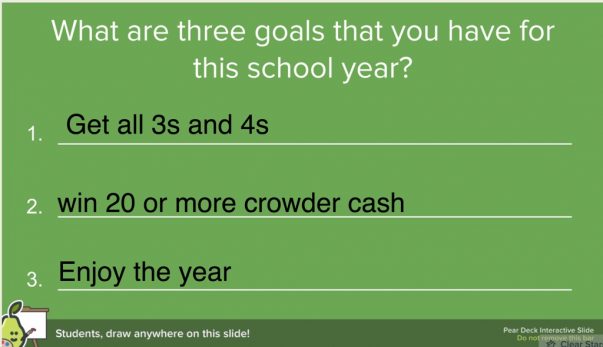 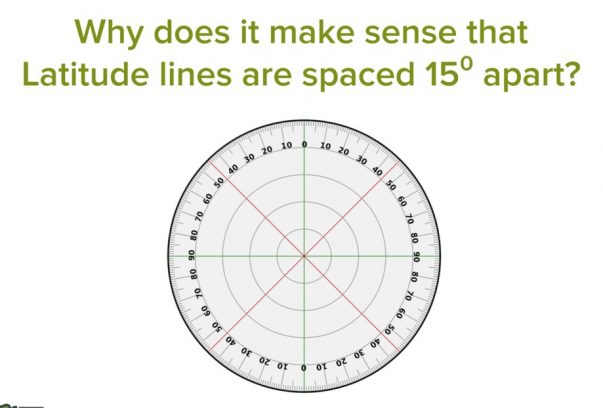 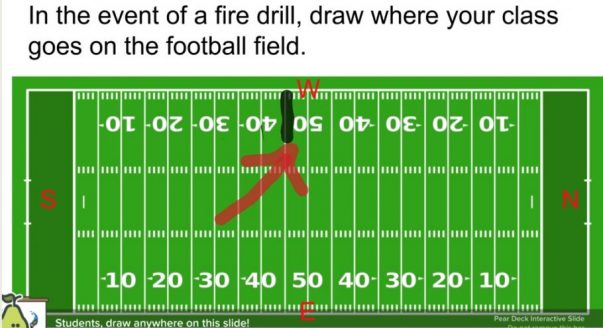 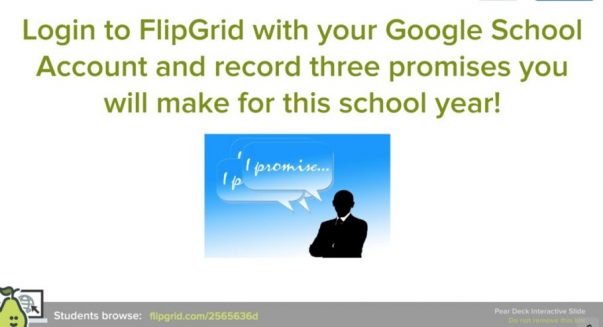 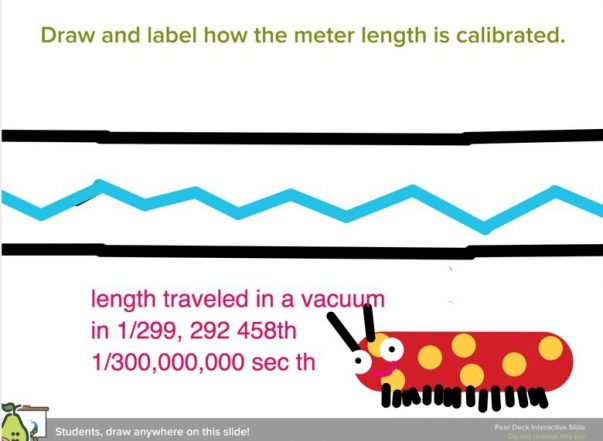 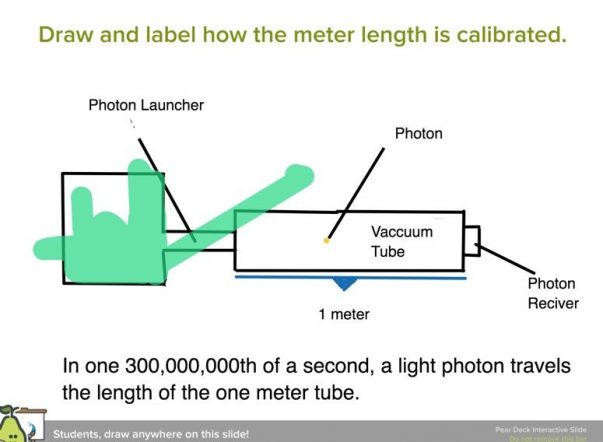 November 1st – 7th Almost everyone who presented their Science Project this year used a cordless microphone.
Students often avoided wearing it, but I insisted. The result was better presentations than past years!

January 12th Made a Pear Deck for the the 8th grade Earth Science class that would coincide with fossils that I demonstrated the day before. I created this formative assessment hastily because 3/4 of the class were on a field trip to Norlan Library at CU. The lesson kept students on track, but they had a great deal of fun with it even with all the missing students! 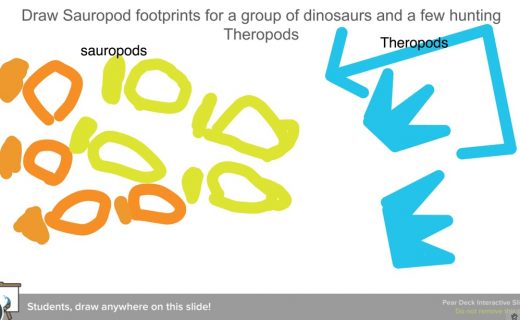 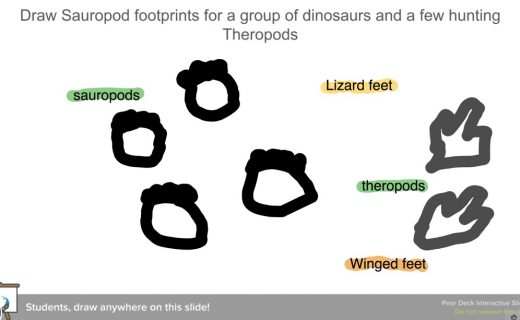 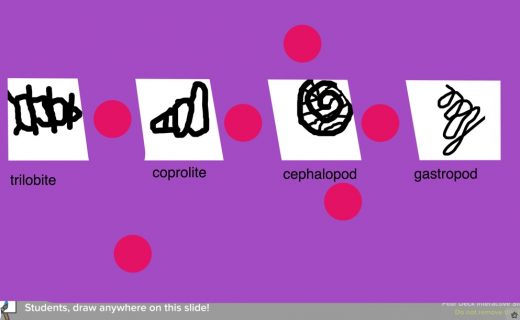 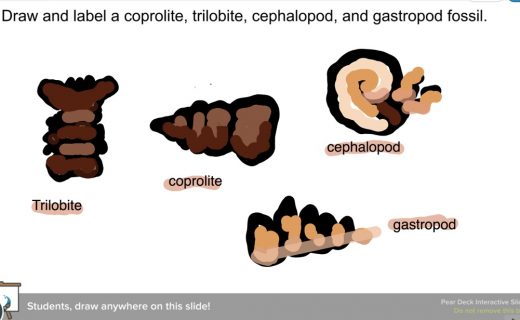 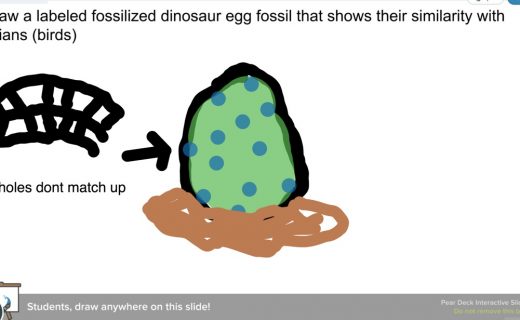