June 25th-September 24th: Ongoing email conversation with Nick Park of Peardeck and Andrew Moore, Kelly Sain, and Ron Cabrera of BVSD’s IT department, with the intent of supporting our district’s teachers with the complete Peardeck program by purchasing their site-license. This has been a long process, but have tried to facilitate moving our district forward with the use of this effective formative assessment tool, while also saving money for both the teachers and district!

Exhibitor for Techsmith, on Flipping The Classroom with Camtasia, for Denver’s ISTE Conference in June 26-29th 2016

August 15th: Presenter at LMS on using Formative Assessments with Peardeck to six different rotations from 8:00am – 11:25

Survey Results for the Class

Continued use of Clickers throughout the 16/17 school year.

Clickers are the quickest way to insure that every student answers questions and learns from drilling of large amounts of material that I’ve found! After December break and mandatory Windows upgrades = loss of ability to save clicker sessions. Thus, loss of the ability to grade clicker sessions.

September 25th How to Use the Online Textbook Video

October 4th Peardeck Questions “Inclined Roll Lab” Used as a formative assessment device before actual lab graphing and lab write-up in order to further the advancement of their final product and student engagement during the write-up period.

September 19-23rd On Peardeck Questions “Data Tables and Graphs”, beginning the use of Takeaways and Use of Peardeck with Science Club for topic focus. Students were engaged for a total of 1157 times!

January 6th, 9th Testing Peardeck’s new beta version with Energy Questions. Most questions were essay type, but also tried a “quick question” response, and it proved to be very effective! Definitely will use this feature in the future! Sent feedback to Peardeck on several problems and also some positive feedback.

February 15th Peardeck used as a formative assessments for deeper investigation into State Changes and Energies associated with those transformations. This preceded the Friday quiz thus influencing the outcome.

March 4th Peardeck used as a formative assessments during a flipped video lesson into the History of the Atomic Theory. 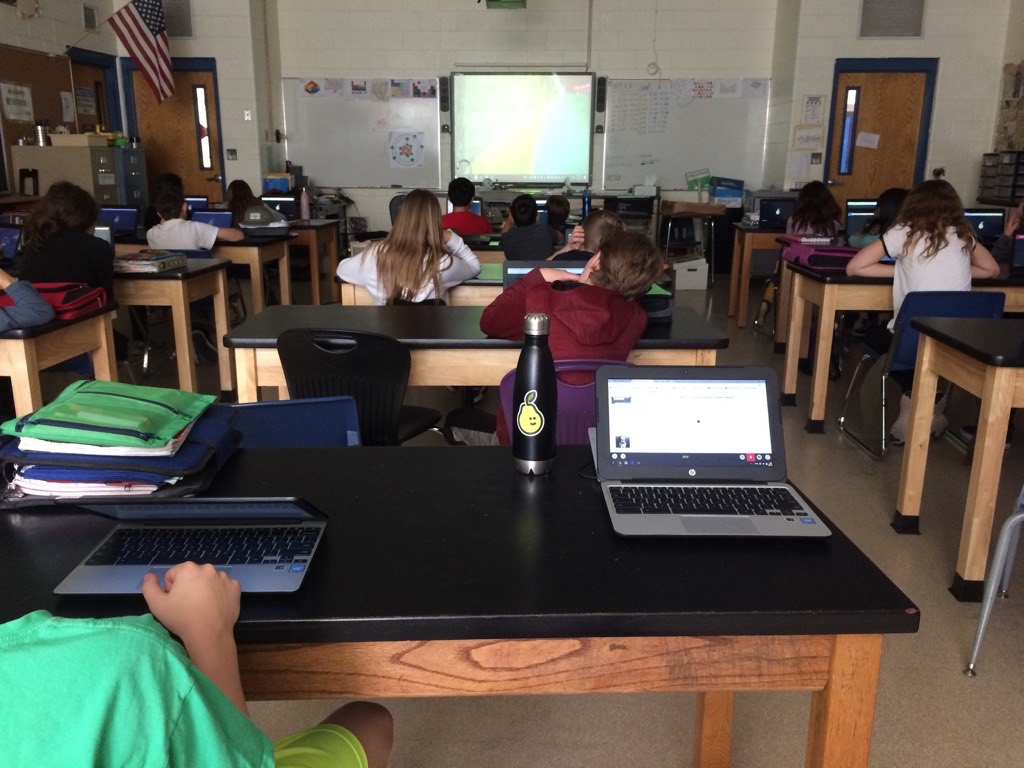 April 3rd-5th Used Peardeck as a real-time display for finishing Element Movie Questions. Students completed the last 3 essay questions on paper, while two students used computers and their exemplars were posted as an aid for the rest. These were graded during the same class period.

April 5th-7th “Neon” Expo pens were used to write on desks. Teams practiced for a better understanding of Atomic Configurations. Before this activity, students were taught how to determine the amounts of Protons, Neutrons, and Electrons, in correct energy levels by using the periodic table, to calculate the numbers for all of the sub-atomic particles. This was a quick interim exercise that overlapped and reinforced this week’s main project: “The Alien Periodic Table”. Student Example

May 24-25th Peardeck used as formative assessment to help students understand Endothermic and Exothermic Reactions and the Chemistry of an Acid Base Reaction. Also The differences in Longitudinal and Sinusoidal Waves